An array of native plants and animals live on the Russell Peninsula and they all benefit from the predator control we are doing.  Some of these species are familiar, like tui, piwakawaka/fantail and riroriro/grey warbler.  But there are also uncommon and rare species here.

Uncommon birds of the forest & shrubland: 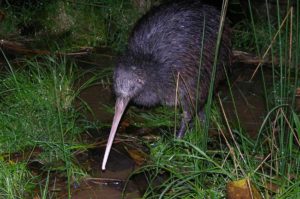 North Island Brown Kiwi: The brown kiwi is a nocturnal, flightless bird.   It used to be common throughout the North Island but, due to habitat loss and predation, it is now a rare species.  Here on the Russell Peninsula we are fortunate that kiwi still live amongst us,  In 2016 the population was estimated to be about 500 birds.  The most recent estiamte is that the population has increased to approximately 650 birds.

North Island Weka: Like the brown kiwi, weka used to be common throughout the North Island.  Sadly, they now exist in even fewer places than kiwi.  Following a successful re-introduction in 2002, the Russell Peninsula is now the national (and international) stronghold of North Island weka.  However, they remain rare nationally and are less abundant and more threatened than the kiwi.  They are vulnerable to stoats, cats, dogs and grumpy gardeners.

Tomtit, pied tit or miromiro: The male miromiro (also known as tomtit or pied tit) is very distinctive, with its black and white plumage.  This tiny bird is particularly vulnerable to rats but has recovered in areas where there is intensive predator control.  It can be seen or heard in several areas of forest on the Russell Peninsula.

Uncommon birds of wetlands or estuaries:

Brown teal or pateke: The pateke is the rarest native duck on the New Zealand mainland. Until recently it was thought to be at risk of extinction, but recent research has confirmed that intensive predator control can help population recovery. It was widespread on the peninsula before the 1980s, and has recently recovered in areas of Uruti Bay, Orongo Bay, Clendon Cove and some ponds adjoining the Waikare Inlet.

Bittern or matuku: Matuku are secretive wetland birds.  They are extremely rare but there is a small population on the Peninsula, including in our “Te Wahapu Mainland Island”.  They move between preferred feeding sites at coastal wetlands in Pipiroa, Waikare inlet and Orongo Bay.

Spotless crake or puweto: The puweto is rarely seen and only occasionally heard.  Its call, which is described as a “maniacal chortle”, has been heard at Pipiroa wetland, in our “Te Wahapu Mainland Island”, and in Parekura Bay.

Fernbird or matata: Matata prefer dense vegetation in wetlands and saltmarsh but can also be found in fernland and rank grass.  They are in decline due to predation and habitat loss but survive in the Pipiroa, Orongo Bay and Uruti Bay wetlands 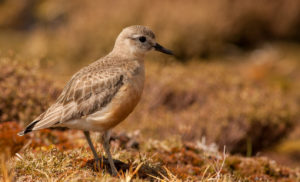 New Zealand dotterel or tuturiwhatu: The New Zealand dotterel nests on beaches, just above the high tide mark.  The nests and eggs are well-camouflaged so they are easily trampled by humans, other animals and vehicles.  The chicks are vulnerable to predation by other birds, such as black-back gulls and hawks, and feral cats.  On the Russell Peninsula, New Zealand dotterel appear to be confined to Waitata Bay and Oneroa Bay.

Northern blue penguin or korora: Korora were once common at Russell and gave the town its Maori name: Kororareka.  However, they are vulnerable to disturbance and predation, so now they breed here only rarely. Nest-boxes and predator traps keep breeding birds safe at Tapeka 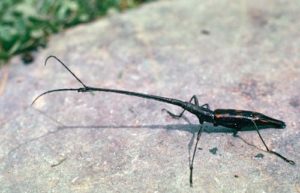 Giraffe weevil: The giraffe weevil is the longest and sexiest flying insect in New Zealand, and its communal mating rituals make it especially vulnerable to predation by rats and mice. We still have breeding populations in forest at the “Te Wahapu Mainland Island”and at Parekura Bay. (See http://blog.forestandbird.org.nz/weasley-weevils/ ) 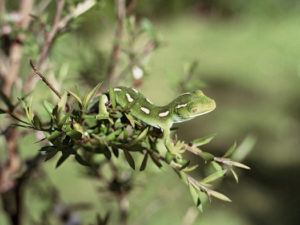 The Auckland green gecko: This gecko is bright green or yellow and is a striking sight if you are lucky enough to see one. They are a rare species and are vulnerable to predation from hedgehogs, rats and cats.

Kauri snails and flax snails: These large, carnivorous snails are present on the peninsula, especially at Te Wahapu. Because of their size they make a good meal for rats.

Tree fuchsia or kotuktuku: Kotukutuku is a semi-deciduous species with flowers and fruit that are favourites of native birds.  Unfortunately, it is also a favourite of possums.  It is not common on the peninsula but its population will increase if possum numbers are kept very low.

Pohutukawa: The pohutukawa is an iconic tree and is also known as the New Zealand Christmas Tree. Prior to the establishment of Project Crimson in the 1980s, pohutukawa were declining in Northland due to browsing by expanding populations of possums. Despite extensive efforts to protect individual trees with metal trunk sheathes and bait stations, the carnage continued until the 2002 pest blitz. Regenerating pohutukawa around the whole of the Russell Peninsula require protection from possums.

Northern rata: Northern rata is a close relative of the pohutukawa and is also a favourite food of possums. A few rata have been reported from the peninsula, including one that was seen in the Te Wahapu Scenic Reserve in 1984, but recent searches have been unable to locate it